In celebration of Yoke Shire’s 25th Anniversary they're releasing a series of videos culled from their archives. Stay tuned for unseen footage spanning the bands career and highlighting great performances that help tell the story of Yoke Shire’s first quarter century of making music. Watch for special Yoke Shire “Tales from the Road” episodes that tell the stories behind specific shows.

This video captures an intimate Yoke Shire moment on New Year’s Eve 1999 as the new millennium was dawning and the Y2K threat was looming large. The video features rare, vintage recordings of a live radio interview & private video recordings of Yoke Shire performing their then freshly written acoustic song “Bard of The North Woods”. The song is captured one-take-live, without a PA system, and with the vocals sung into the open air. The scene is set in the rustic fireside grandeur of the great room in an old New England farmhouse. Relive this entrancing snapshot in time as Yoke Shire turns the clock back to New Year’s 1999-2000!

YOKE SHIRE “THE BATTLE OF EVERMORE” LIVE IN 2014

Yoke Shire performs Led Zeppelin’s "The Battle of Evermore” live on stage opening for Rick Derringer at The Bull Run (Shirley, MA, USA) on 7.18.14. This song originally appeared on Led Zeppelin's 1971 masterpiece LP "Led Zeppelin IV". In celebration of the 50th anniversary of this album, the Herlihy brothers present their performance of this acoustic rock gem.

Yoke Shire pays tribute to Glenn Frey on the 5th anniversary of his passing with this video featuring a vintage live on-air radio performance of The Eagles' "Peaceful Easy Feeling". This performance was recorded Live in The Fallout Shelter Studio on the "Almost Acoustic" radio show on WUML 91.5 FM radio Lowell, MA, USA - March 5, 2016. This Top 40 country rock gem was the third single released by The Eagles from their 1972 debut album.

Yoke Shire pays tribute to John Lennon on the 40th anniversary of his passing with this video featuring a vintage live on-air radio performance of John and Yoko's holiday classic "Happy Xmas (War is Over)." This performance was recorded on a wintry New England day in December 2009 at WCAP 980 AM radio Lowell, MA, USA.

YOKE SHIRE "OVER THE SUNRISE" LIVE AT SOLARFEST 2004

Check out Yoke Shire performing their acoustic rock song "Over the Sunrise” captured live on a solar powered stage at Solarfest 2004! This video is the first entry in Yoke Shire’s “Tales from the Road” series & recounts the band’s travels to the festival in Vermont. It’s presented in celebration of Solarfest's 25th anniversary.

Watch the video now:
Yoke Shire "Over the Sunrise” Live at Solarfest 2004

Yoke Shire plays Santana’s “Evil Ways” live on stage at The BBC, Westford, MA USA on June 8, 2013. Yoke Shire released this version of Santana’s Latin flavored, classic rock gem in celebration of the 50th Anniversary of The Woodstock Festival. Santana performed this song at the original festival during their breakthrough set in 1969! 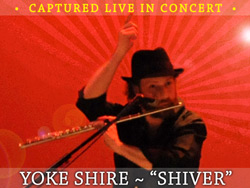 Calling all Yoke Shire fans - be sure to like Yoke Shire’s Facebook page! Give us a like and help turn the world on to Yoke Shire's music. Facebook/YokeShire.