In Time for St. Patrick’s Day 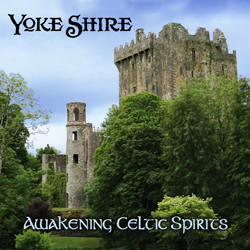 Yoke Shire are chameleons. The prog-rock group from Chelmsford, Massachusetts have gone acoustic in the past but this time they have gone Celtic. Brian and Craig Herlihy get in touch with their Irish roots on Awakening Celtic Spirits. Released in time for St. Patrick’s Day, their new CD features 11 traditional Irish and Celtic songs that have been passed down through generations of Irish families for centuries.

The most fun thing about listening to Yoke Shire’s Celtic music is in trying to determine which old world instrument they’re using to play the music they’ve come up with. They actually do justice to these time-honored, much loved tunes.

The CD opens with a new interpretation of “Finnegan’s Wake” that relies heavily on a bodhran and feigned Irish accents for its ethnic flavoring. “Maid Of The Sweet Brown Knowe” gets by on the Herlihy boys singing the chorus in a low tenor harmony thick with old world charm. There is also a sweet melody on “Knowe” played on a melodica. A melodica is a cross between a flute and a handheld piano.

Smooth flowing harmonies on “The Moonshiner” carry the song forward with a handsome sweep. Beneath the husky old world charm is an assortment of guitars and mandolin that form a thick mesh of Celtic feel. The Herlihy boys rely on melodica again for the sweet high melody in this song, and it is a wise choice of instruments.

“Rising Of The Moon” finds Craig Herlihy’s piano tinkling edging itself above the sweep of old world melodies from their melodica. Very appealing percussion instruments too rise up and create a marching beat that gives the song a fine quality of moving. “Rosin The Beau” makes splendid use of a bodhran for the songs fulsome percussion sound. A mandolin makes for some sweet persistency while that melodica provides an interval of high notes that makes one long for a far away land.

"They actually do justice to these time-honored, much loved tunes"

The Herlihy boys have certainly captured the magical feeling of this music. Celtic music, relying heavily on a hearty beat, isn’t really that far from rock and roll after all, and Ireland is only a CD away. “Irish Rover” is the most familiar of these old world tunes. In the hands of the Herlihys “Irish Rover” becomes the best example of how Celtic music was constructed. The beat is basic but the percussion instrument used to play it, usually a bodhran, has a fulsome sound that makes the beat sound lively and motivational. Above that is a thick melody created by several treble clef instruments. It is common in Celtic music to hear guitars, mandolin, piano, flute, dulcimer, fiddle, lap steel, and autoharps all on one song. The percussion usually provides the low end wedge for these numerous melody instruments.

“Star Of The County Down” is standard faire. You can hear mandolin being picked, autoharp strummed, and melodica blowing. A two-step percussion anchors that weave of melody while also motivating the feet to dance a jig. The boys, in Celtic tradition, sing almost the entire song together, not just on the chorus, which eventually became the common form in popular music.

Any musician can play notes and chords. Only a special player can capture the essence of something that has been around for centuries. Listening to “Lark In The Morning,” with its hearty strumming and breezy, free melodica, makes you yearn for even more glimpses into this bygone era. “Lark” will certainly give listeners a bounce in their step. A mandolin, gently picked, gives this song its heart. The melodica returns to bounce around lightly, playfully, giving some of that timelessness. This ephemeral quality becomes the strongest point. The Herlihy boys do justice to these songs in that you can hear the richness in them. These songs were enhanced through centuries of refinement, and it would require musicians who can play as effectively as the Yoke Shire duo to capture the essence of each note.

“The Foggy Dew” revels in the richness developed in its slow tempo. Taking their time with this one, the Herlihy boys offer rolls of hearty old world piano and something unnamed whispering hauntingly in the background. This music makes you imagine sounds that are not actually there because the overtones somehow remain, humming beautifully, while the notes keep coming. “Danny Boy” features the most charming, handsome vocal on this CD. Craig Herlihy’s voice is so full and rich that the vocal alone can make you feel the centuries. He holds and stretches out notes, making them beautiful and authentic.

The Herlihy boys close out their CD with the familiar “When Irish Eyes Are Smiling.” That well-known chorus comes to life here when they sing together. Their voices wrapping around the words and filling them with zest, enthusiasm, ebullience.

Yoke Shire might be the first hard rocking prog-rock band to record an album of Celtic music. Yet, they pull it off in grand style with heartfelt attention to detail. One listen to this music and you’ll likely be considering Ireland for your next vacation.